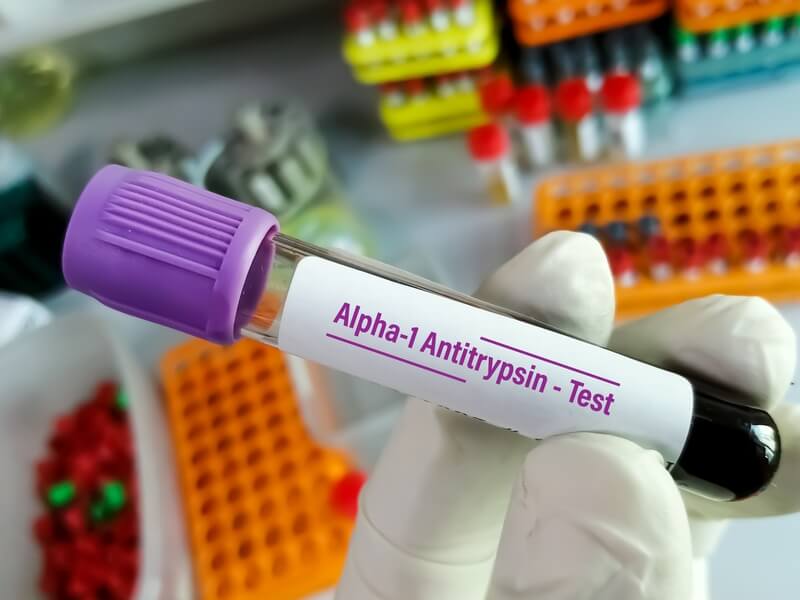 Alpha-1 antitrypsin (AAT) deficiency occurs when you have a low level of AAT in your blood. AAT is a protein primarily produced by your liver and circulates in your bloodstream. This small protein is essential in protecting your lungs and other organs from being damaged by irritants and infections.

This is a rare genetic disorder that increases your risk of suffering from emphysema and cirrhosis, i.e., your lungs and liver are both at risk of disease. Some of the consequences are life-threatening.

This rare genetic disorder is not very common and is often underdiagnosed. It occurs at the same rates in males and females. It is primarily seen in people with Central and Northern European heritage.

Cause of Alpha-1 Antitrypsin Deficiency

AAT deficiency is caused by a change in the gene that makes the AAT protein. More often than not, the AAT protein isn’t shaped correctly, which prevents the protein from traveling from the liver (where it is created) into your bloodstream.

The excess build-up of ATT proteins in the liver can damage and scar your liver. This can contribute to disorders such as liver cancer and cirrhosis.

AAT deficiency results in a low level of AAT proteins in your general blood supply and a very high amount in the liver. The ATT protein helps protect organs against irritants and infections. Lacking the ATT protein can increase your chance of developing lung issues like bronchitis and emphysema.

This condition is passed from a parent to a child. People with the most severe form of this condition get an abnormal gene from both parents.

The Symptoms of Alpha-1 Antitrypsin Deficiency

Some people with an ATT deficiency don’t even know they have it. Others have the condition their entire life but don’t develop symptoms until they are in their 20s to 50s.

For people who do develop symptoms, many of them are very similar to those associated with chronic obstructive pulmonary disease (COPD). Symptoms can include:

Other symptoms that you can develop if you have severe ATT deficiency associated with liver disease include:

Often, patients with AAT deficiency are first diagnosed with asthma due to the similarities in symptoms. If you are not responding to asthma treatments, we will pursue an alternative diagnosis, such as ATT deficiency.

There are lots of options for treating ATT deficiency, depending on the severity and development of the condition in your body.

With the proper support, you can live an active and enjoyable life with ATT deficiency.

Get Care for Alpha-1 Antitrypsin Deficiency in Portland, Oregon

Do you have or suspect that you have ATT deficiency? Our team at West Hills Allergy & Asthma Associates can help diagnose your disorder and develop a treatment plan that allows you to live a full and healthy life.

For a consultation with Dr. Rene Anderson-Cowell, you can call us at (503) 297-4779 or request an appointment online.

This website uses cookies so that we can provide you with the best user experience possible. Cookie information is stored in your browser and performs functions such as recognising you when you return to our website and helping our team to understand which sections of the website you find most interesting and useful.

Strictly Necessary Cookie should be enabled at all times so that we can save your preferences for cookie settings.

If you disable this cookie, we will not be able to save your preferences. This means that every time you visit this website you will need to enable or disable cookies again.